Yesterday was my father’s birthday. He died 6 years ago from complications of alpha-1. It’s a terrible genetic flaw that causes lung disease and I wouldn’t wish it on a single soul. In some ways he was lucky as his symptoms didn’t really effect him until the last ten years of his life, for many others, by their 30’s it’s already in full swing of suffocation mode. He was 77 when his lungs finally gave out.

I still miss him, that doesn’t ever go away. My grief and obviously the rawness have diminished with time. Its such a strange experience to watch someone you love in such extreme pain and discomfort that you pray for it to end, but when their body finally surrenders to illness, your relief is eclipsed by missing them and selfishly wanting one more hug, or joke, or phone call.

The first year and birthday were tough. I kept wanting a sign that he was ok. I had this irrational perception that he would let me know in some profound way at some point, I decided that should be his birthday. My father had been stoic in his plight, his will to live had been strong. I had grown up with an appreciation for the occult and supernatural, but that had been my mothers influence, my dad had not said much on the subject. My husband took my children to a Mets game the night of his birthday that first year. I thought I was better off at home just reminiscing and willing a glimpse of his life force.

There I was, home alone, 7:30 at night, just thinking of my father, when suddenly my dogs went crazy. My Luna, a golden doodle, was just 2 and beating the basement door with her paws. I foolishly opened it and chased after her in my own curiosity. Unbeknownst to me, a skunk had somehow gone into my garage, ripped through the drywall and had gone into my utility room where my furnace and well are located…he immediately was afraid of us and used his primary weapon of defense, spraying the air, Luna, myself, and my home with his noxious musk. The horror was instant and unrelenting. Poor Luna was howling as the vapors burned her nose and eyes. I was screaming at the universe, yelling though my tears that this, most definitely, was not the sign of life I was hoping to find.

The next few hours of triage for Luna and I were probably more hellish than you can possibly imagine, and yet I kept, between my tears, cackling with laughter as I spoke to my father, saying ” Really dad! Really! A skunk!?” I was no longer sane, and was quite relieved my family had not been there for the worst of it. Alas, my sense of smell was ruined for weeks if not longer. The walls had to be ripped out of the basement and much of what had been stored there was ruined. I was broken but yet in the fallout of mass destruction, I found a spark back to life, a mission to ensure my children’s home environment was livable and secure took over my self pity and forced me to choose the present moment over missing the past.

It’s not always comfortable or easy to just be present, or to accept those bizarre and painful moments that just happen. Death is the biggest loss any of us face, but by fearing, worrying, self pity, and yes even reminiscing the past, we are kept from living and having the potential for more joy, more love, more growth, and less skunks. I don’t need anymore signs dad, Happy birthday xo.

While studying in India, part of the after morning practice routine was a well needed stop at the coconut stand. Most mornings I was just spent and blissed out greedily quenching my thirst, not taking in much around me other than the fact that there were others in the same transfixed state of needing to replenish some lost fluids with this amazing gift of nutritious coconut water gloriously and skillfully machete chopped open right before my eyes.

Certainly as a place of congregation there was always snippets of conversation floating about. Though many spoke of details of practice, struggles, or bragging rights, there was also just some getting to know each other. I made a few friends by the stand. I overheard a conversation where someone was discussing something about his astrological chart, he mentioned that the astrologer had told him, in this life he wasn’t meant to do anything great or spectacular. I couldn’t help myself, but to turn, and say, wow, that wasn’t a very good astrologer, because how could they possibly know the full ripple effect of your existence? Maybe you won’t be the next Gandhi, but who’s to say that you smiling at a random stranger didn’t change them, or something you said didn’t inspire someone else to start a revolution of peace or kindness or just getting back on the right path? I mean it’s like past life regression, not everyone was Joan of Arc or Confucius, but maybe, if you believe in it, maybe you were the person who gave Da Vinci his first paper and charcoal or read Shakespeare his first poem? Who knows how fully our actions effect this world around us, and why wouldn’t just showing compassion be great enough? The gift of love is liberating and inspiring. We became friends.😊

This morning, my son was telling me a story of his experiences doing community service in Sicily two summers ago. He was working with a group of teens helping build and refurbish a community center and orphanage. As they were only there for two glorious weeks and all aspects of this work was done in stages, his stage was part of some of the finishing touches around the main home. The home was already completed but a courtyard still needed to be made and construction debris, which was basically stone, that had to be moved to a safer place or where it could be used. So much of their work involved literally picking stones up from one side of the road and bringing them to the other side. One of the other boys, my son explained, complained that this work was boring and didn’t seem as grand or noble, to just pick things up and put them down again. The counselor in charge shook his head laughing stating it might not seem like much, but that each facet was just as important to making the project a success. I was thrilled my son understood this. That all the work to make this project safe and welcoming was needed, that the cherry on top came from the effort and the process may not always be glamorous but that the little things matter.

Who will come from that home? Who will be raised there? Will they change the world? Will they have a better life? Will my son? Will I? I have no idea, but I will try to appreciate and love this journey of life. With everything, it’s about the process, not the product. The Bhagavad Gita states in 12.12 “Give up the belief that inner peace depends on results of action. That result-renouncing state is pure inner peace.” So lovely to think, yet I know how hard that is to maintain, hence 99% practice!

Did you know the coconut is a drift nut? 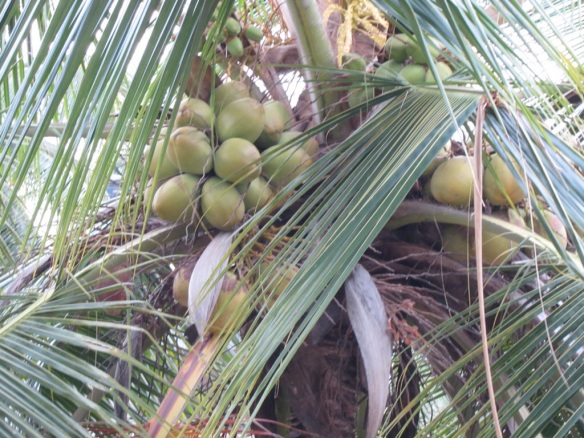